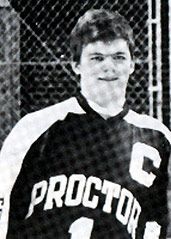 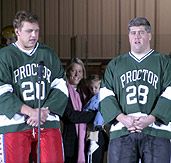 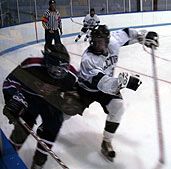 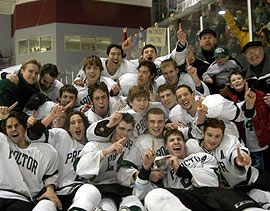 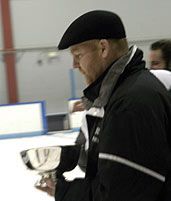 Proctor's new hockey rink is dedicated to the memory of Teddy Maloney. Teddy was a passionate varsity hockey player during his four years at Proctor, playing goal keeper and leading the team as co-Captain during his senior year, 1987-88. Teddy lost his life in the World Trade Center on September 11, 2001. More than four hundred friends of Proctor hockey attended the rink dedication, November 16, 2002. The came from every part of the country--with only one thing in common: to memorialize a man through a building he would love. Below, from left: Rhys Brooks '88 and daughter, Mark Maloney '90, Eddie Maloney holding Teddy's daughter Mason, Trask Pfeifle '89, and Sally Maloney holding a sleepy "Teddy". 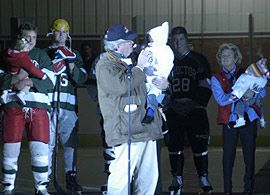 Two-year-old Mason dropped the puck for Teddy's sibs Sally and Mark in a photo that was used in Sunday's Monitor article covering the event. 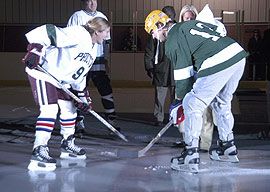 Emotions ran their course, as Eddie spoke of the loss that will always be; Head of school Steve Wilkins unveiled a plaque with Teddy's #1 shirt, and the throng listened to the Proctor Chorus sing the National Anthem. 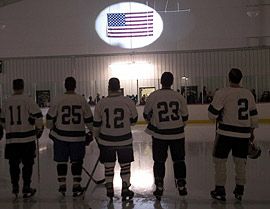 Since its dedication, "The Ted," as the rink is affectionately known, has been home to New England Division II Champs and a strong, fast-improving girls' program under the leadership of coach Emily McKissock. 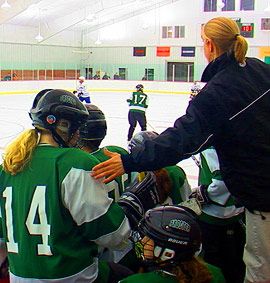 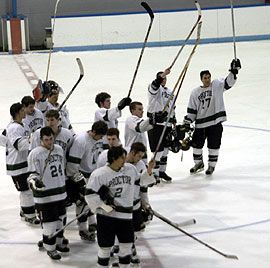