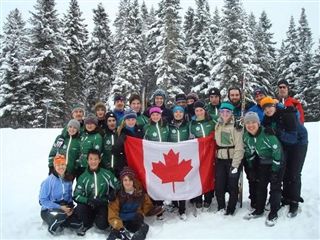 1/9/2014
A solid snow base on Proctor’s trail system early in the season combined with its annual training trip to Quebec during the start of winter break has this year’s team ready for the season ahead. Senior co-captains Emi Morison (Andover, NH) and Sawyer Meegan (Newbury, NH) are optimistic about this team’s potential, but more important, about its room for growth. Morison, whose father, Buz, leads the Nordic program at Proctor, notes, “The team this year is incredibly driven and unbelievably positive. The Canada trip is critical to our season because many, if not most, of our skiers are new to the sport, or only ski through Proctor. Being able to go away and ski intensively allows us to become better technically, and also to develop a love of cross country.” The four day training trip to Foret Montmorency, Quebec included nineteen athletes and four coaches, providing ample individualized training for each skier. Morison adds, “The trip is important to our season because sometimes by the first race other schools have only had snow for a few days, while we’ve been able to learn technique and train on beautiful trails both in Canada and at the Proctor Ski Area for weeks.” Meegan adds, “I've seen kids who could barely stand up one day quickly evolve into skiers who look like they have been on cross-country skis all their life over just a few days during our training trips to Canada. Not only does the trip allow the beginners to find their ski legs, but the returners get to prepare for the season at their own pace and focus on their own weaknesses.”


While Wednesday’s opening race did not count toward the league championship standings, it served as an excellent gauge for how Proctor’s team compares to other teams in the league. As Morison notes, “ I think we have many strong and up-and-coming skiers. Two years ago we won Lakes Regions and have been building since those seniors graduated. I expect our team to continue to develop and become better racers as the season continues.” What is most fun about following the Nordic ski team each year is the individual progress of all skiers. While Proctor’s Nordic program has produced Olympic level skiers, the real goal of the program is to develop a passion for Nordic skiing within those members of the team. Morison adds, “What's so cool about Nordic is that for many it is new and in their first season it is difficult and awkward, but by the time they leave Proctor many are fast enough to race in college and go to J2 Championships, the Eastern High School Championships, to represent the state of New Hampshire.” Meegan echos his co-captain’s thoughts, “As a team we should look to improve our overall results every race we get to ski in and to continue to push each other during practice. I have no doubts that this group is capable of both these things. Nothing is more motivating than being pushed by your peers and that is what this team will do.”


With a number of league races before the Lakes Region and New England championships in late February, significant growth will occur on this team. Newcomers will evolve into experienced skiers, while veterans continue to refine technique and seek personal bests. Morison comments, “This season we have many goals, a lot are personal, and are about personal growth and maybe racing a certain time or distance. However, contrary to popular belief, Nordic races are team events and orchestrated with strategy.” Meegan and Morison agree that their team’s goals must extend to learning how to work a course, when to pass, how to work with teammates during a race, and how to wax for the right conditions; skills that are essential to becoming as strong a team as possible.

This evolution of team will continue over the next two months, spanning six more league races, Eastern Cup races, the Canadian Ski Marathon, and a trip to Norway to ski the Birkebeiner in early March. Be sure to follow the team’s progress this year, as it is an exciting time to be a Nordic skier at Proctor!
Back
Tweets by @proctoracademy