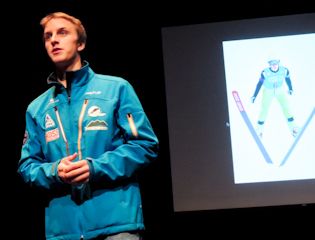 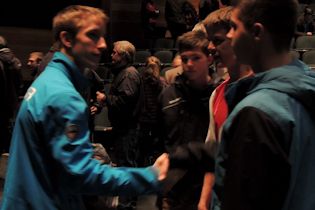 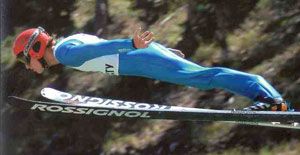 1/23/2014
Fairall’s visit to Proctor’s assembly last Friday created much enthusiasm around the upcoming Olympic games, however, what makes Fairall’s journey as a ski jumper even more intriguing is the connection he has to former Proctor students and Olympians Carl Van Loan ‘98 and Jed Hinkley ‘99. As a young six year old jumper working under legendary coach Tim Norris at the Proctor Ski Area, and as a member of the Andover Outing Club, Fairall watched Proctor students Hinkley and Van Loan compete during their high school years. Both Hinkley and Van Loan would go on to compete as members of the US Nordic Olympic team; Van Loan in the 2002 Salt Lake City Olympic Games and in the 2006 Torino games, and Hinkley in the 2002 Salt Lake City games.

Carl Van Loan’s '98 Nordic combined career took off during his time at Proctor when he was named the Junior National Champion in Cross Country skiing as well as the Junior National Champion in Nordic Combined skiing. Immediately following his graduation from Proctor, Van Loan moved to Steamboat Springs, Colorado and joined the US Nordic Combined Ski team. Between 1998 and 2006, Van Loan represented the United States in four world championship races, two Olympic games and won twelve cross country ski races in the World Cup B Nordic Combined circuit, including a gold medal at the 1999 World Junior Championships and a silver medal at the 2000 World Junior Championships. Van Loan nows runs his own personal training business and continues to give back to the Nordic ski community as a coach. Visit his personal training website here.

Jed Hinkley '99, a native of Andover, NH and son of long-time Proctor faculty members Bert and Dani Hinkley, grew up competing with Van Loan (a native of Webster, NH) before joining him on Proctor’s Nordic and Ski Jumping teams during their shared time at Proctor in the late 1990s. Hinkley competed on the World Cup B Nordic combined circuit with Van Loan and also qualified for the 2002 US Olympic Nordic Combined team. In addition to his bid to the 2002 Olympics, Hinkley’s seven year stint on the US Nordic Combined Ski team included 4 World Junior Championship Teams, the same 1999 and 2000 World Junior Championship results as Van Loan, and the 2003 World Championship team. Hinkley is now a high school Chemistry and Biomedical Sciences Teacher in Aurora, Colorado where he continues to cycle and ski.

Now Fairall’s journey has come full circle as he recently visited the Andover Elementary/Middle School (as seen here on WMUR 9) and spoke to students about the challenges he has had to overcome during his competitive ski career. Fairall shared similar thoughts with the Proctor community last Friday (see video of Fairall’s talk in assembly below), highlighting the devastation he felt after being the last athlete cut from the 2010 Olympic Ski Jumping team. “I was crushed, but was also surrounded by friends and family who helped me get over that devastation and recommit to my goals.” Fairall went on to implore Proctor’s students to not be put off by adversity, but rather to embrace it, to work through it, and to allow it to make you a stronger person in the end. To read a more indepth interview with Fairall, click here.

While Van Loan ‘98, Hinkley ‘99, and Fairall represent three Olympians trained by Tim Norris at the Proctor Ski Area and the Andover Outing Club, former Proctor snowboarder racer Sarah (Hamor) Greensfield ‘00 also represented the United States at the 2002 Salt Lake Olympics when she foreran for the Women’s Snowboard Racing team. Following her years racing at Proctor, Greensfield went on to a race competitively on the national level before being placed as an alternate on the 2002 Women’s Snowboard Racing team. Greensfield has gone on to have a successful career as an entrepreneur and business consultant living in southern New Hampshire’s seacoast region.

Additionally, fellow Andover resident Chris Lamb (ski jumping) narrowly missed the 2014 Olympic team, while Kris Freeman (Nordic skiing) will represent the United States and Andover, NH in the Olympics for the fourth time after competing in the 2002, 2006 and 2010 Olympics, a truly remarkable accomplishment for the thirty-three year old who competes as a distance Nordic skier despite having Type 1 Diabetes. Read more here and here. Congratulations to all Proctor alumni who have represented the United States at the Olympic levels. Thank you for the example you have set for current athletes, and for recognizing the role Proctor played in your careers!
Back
Tweets by @proctoracademy