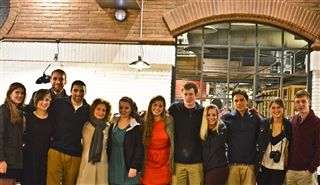 As we step into the dimly lit and elegant restaurant, we are greeted by a small woman dressed in different shades and textures of grey.  Guillem’s mother, Gloria, leads us past watching couples who are already enjoying their dinners and brings us to a long table which is situated against a wall of empty green wine bottles.  The room smells of delicious salty meats, sweet fragrances of dessert wafting from the kitchen, and wine.  After asking only one simple question, if anyone is not fond of lamb, Gloria proceeds to order plate after plate of traditional Catalan cuisine.  For the first few bites of food, our Proctor clan is unusually quiet as we observe our host for the evening and how she carries herself.  Soon she has us all laughing while she recounts stories about her son and her visits to our campus.  Feeling slightly tired, my mind drifts from dinner.

Before I came to Barcelona, my host mother must have told me at least five times to be careful and watch my things at all times.  Within our first five minutes in the subway, thirty euros were stolen from Nicola’s wallet while I stood within arms length of her.  Leaving the subway, the chaos did not end, and the loud cars and people conversing in the streets were in sharp contrast to the calm walk in Segovia from my house to the school I had been enjoying so much every weekday.  Back in the restaurant a plate of bread with tomato and a garlic mayonnaise was placed in front of me.  As I started to eat, the thoughts of the outer world only some fifty feet out the door were forgotten.  Impressed by Gloria’s English and how seamlessly she transitions between it, Castilian and Catalan, I think of my own language experiences.  Gloria informs us that as a child she was sent in the summer to intensive English class, and having lived in Barcelona all her life, she doesn’t even notice which Spanish tongue she is speaking.

When I was born my parents had already planned a two month trip to Italy and wanted to give me a name that would be easy for Italians to pronounce.  Shortly after this I was brought to Israel while my mom did her work; during this time many Israeli men and women played with me and watched me crawl around their kibbutz.  Since I was a baby, I have been blending with other cultures and taking in different languages.  There really is something to be said about children having the easiest time learning; the majority of my Spanish I acquired between the ages of four and twelve.  Although during my first few weeks of life in Segovia I at times became quite frustrated with my lack of Spanish, having dinner with Gloria gives me the desire and motivation to learn the most Spanish I possibly can.  Her knowledge of her city reminds me to take note of every place we visit and tuck it away until I am to remember our wonderful trip once more.