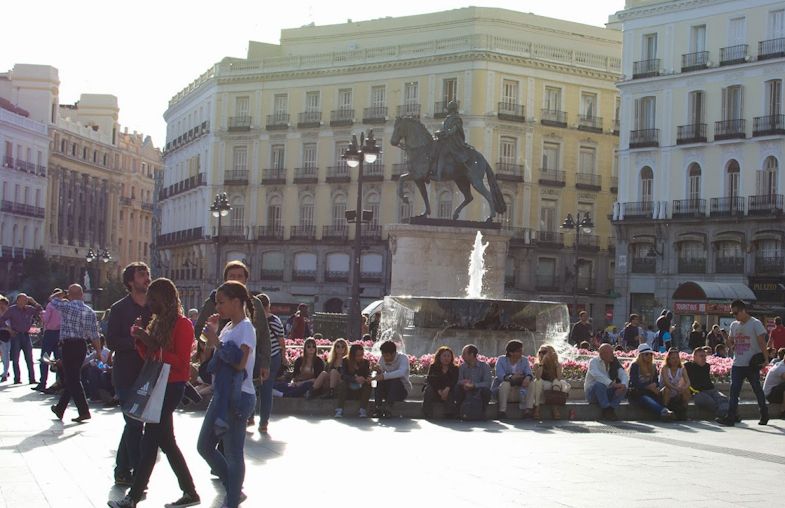 There were three things that I knew would happen if I got on to the trip: I would learn Spanish, I would eat some amazing food, but, most importantly, I would get to see Real Madrid live. Upon arriving in Spain I expected so much more of the culture to be involved with soccer, but apparently I was wrong. The weeks went by and the anticipation was eating away at me at an increasing speed. On the day of the game I woke up, got dressed in my Real Madrid shirt, a pair of jeans, shoes, and my Real Madrid cape. I was so ready for this game. We had to do a few things before the game because it only started at night. Getting to the game only pumped me up more and seeing all the other fans made me so happy. When we got to the stadium I practically ran to my seat; I couldn't wait for the game to start. Watching them practice was amazing.

The game started and, twenty minutes in, I could tell that I was losing my voice from yelling so much. I watched Ronaldo with close eyes; every move he made I saw. At the last minute of the game he scored a goal with his heel. The whole crowd erupted in joy and screamed his name. I was so happy, I had seen Ronaldo score an amazing goal, and had seen Real Madrid play live. It was one of the best days of my life.

~ Tristan Stenzel
Valencia took the corner kick across the field from us. We saw the ball move into the air above the goal while a large Valencian defender (who came up for the corner kick) lost his marker and leapt into the air and put his head on the ball to put it in the back of the net. Valencia had just scored to take the lead of the game. Sitting up close to the field in the right corner of the pitch we saw the goal perfectly. They came up close to where we were sitting and celebrated their accomplishment of being ahead within 36 minutes of the game. As the whistle blew for half time the Madrid fans expressed their frustration at being behind.

The second half started with pace and determination from Madrid that paid off. From a free kick the captain kicked the ball into the open net from a deflection from a shot of a teammate. The crowd went crazy, but sadly the excitement faded away shortly after when Valencia scored again to take the lead. With 20 minutes left in the game and being a goal behind, Madrid attacked with full force with the support of their loyal fans who were singing, cheering, or swearing at the referee. The final minutes of the game were intense as Real Madrid needed to tie.  This would at least earn Madrid a point in the league to catch up to first place holders and city rivals Atletico Madrid. The last minute of the game we had the honor to watch one of the greatest goals ever scored in the Bernabéu. The ball was crossed in front of the goal but took a deflection changing its course putting it behind the recently voted all time player of the year of 2013, Cristiano Ronaldo. The problem was that he was already in the air towards the end of the goal. In the last second Ronaldo swung his legs behind him hitting the moving ball with the back of his foot into the net; he did all of this without looking. The crowd (including us) went insane yelling at the top of their lungs. Even Valencia fans were clapping at the beauty of the goal they just witnessed. The game sadly ended 2-2, but to see Ronaldo’s incredible goal scored immediately in front of us is a moment that will live with us forever.